Here at MaidenFans we occasionally receive samples of interesting Iron Maiden-related promotional materials or literature. Thomas Hägstrom was kind enough to send us a copy of his photo book covering an Iron Maiden and ACDC concert set at Gota Lejon in 1981. 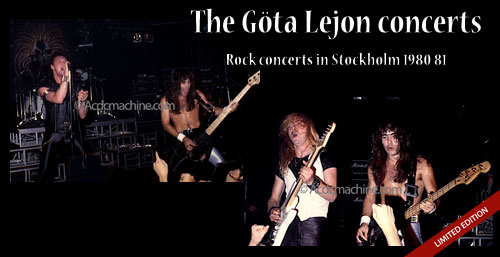 The Göta Lejon cinema was inaugurated in January 1927. The seating capacity was 1300 including 500 on the balcony. During the early eighties it was used for concerts. Those were exciting years. Many post-punk rock and heavy metal bands played there.
In those days you were allowed to stand very close to the band playing.
Security was not as rigid as today.
There were no fences around the band - only 3 feet between you and the band and no problem shaking hands with the members!
Taking photos of the band was encouraged - if you had a camera you were asked to come as close as possible.
The state setups were plain and simple - the focus was on the music itself.

Thomas has done a beautiful job of restoring the photos and the book is gorgeous, printed on very high quality paper and making the best of these early images. We’ve heard that there are only 500 of these books to be made, with over 80 already sold, and we’d definitely recommend it to anyone interested in this period in Maiden’s history, their Swedish gigs or Iron Maiden/ACDC fans. This is an exclusive glimpse into Maiden’s early days - these pictures have never been seen before.

If you’re interested, check out more details and the order form - the book is exclusively sold by ACDCMachine.com.

The Iron Maiden concert at Göta Lejon on the 8th September 1981 was part of the Killer Tour, with a set list of:

Information about the book itself:

This fan website is not official, or endorsed by Iron Maiden.
© 2002-2019 MaidenFans.com, All Rights Reserved.