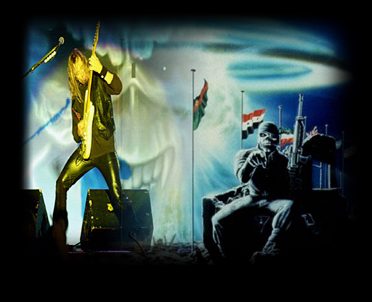 The Maiden’s classic third guitarist who would prove to be the group’s most recognized axe man songwriter. Like Dave Murray and unlike Janick Gers, Adrian Smith is a guitarist who is a more laid-back and relaxed character both on and off the stage. That being said, his personality and presence at gigs can prove deceptive at times, because Adrian Smith, besides being a technically classic guitarist, plays with a contemporary slickness that cannot fail to be recognised. Before we get to H’s styles, solo’s and the like, it should be pointed out that Adrian Smith is not only Maiden’s finest songwriter guitarist, but he is also well respected in the music world as one of the finest writing guitarists around. Some of Maiden’s (and metal’s) finest moments have came about through H’s hands.

On the heavy side, we have offerings such as 22 Acacia Avenue, The Prisoner, Total Eclipse, Flight Of Icarus, Two Minutes To Midnight, Sun And Steel, Sea Of Madness Moonchild and The Fallen Angel. Though the real luxury of have Adrian as a contributor to Maidens songs was the new element of sound that he brought to the forefront of the band. The likes of Wasted Years, Stranger In A Strange Land, Can I Play With Madness and The Evil That Men Do offer a lighter, more rhythmic touch to Maiden’s back catalogue.

Wasted Years was a kind of mid tempo metal ballad, while Stranger In A Strange Land contained huge hints of the heavy blues rock crossover that Mr. Smith loves so much. And while still possessing the ability to deliver those as standard Maiden classics, Adrian brought a commercial (but still heavy edge) to numbers such as Flight Of Icarus, Can I Play With Madness and The Evil That Men Do and The Wicker Man.

Back In The Village and Hooks In You were Smith’s only authentically weak contributions. From what we have heard from the likes of his ASAP and Bruce Dickinson solo contributions (notably Silver And Gold, Fighting Man, Ghost Of Cain, Killing Floor, Welcome To The Pit and Machine Men,) he lost little in the way of writing ability.

With a writing variety of everything from lightly tinged blues, hard rock and contemporary metal, Smith’s writing ability is clearly to be reckoned with - and these ears haven’t even heard anything of his other project Psycho Motel!

Adrian always gives you the impression that he’s having to work really hard to pull out his solos, his face and fingers grafting and grinding out every note. He’s not the kind of player who goes out to blind you constantly with out and out pace, but when called upon to do so, he’s delivered many a franticly fast solo in his time.

Check out solos on the likes of The Mercenary, and you’ll see just how viciously paced H can get — we say only this track, because that solo paves it’s own praise — as one source described it, ‘a fret melting solo’. In fact, it’s his solo project’s (ASAP, Psycho Motel) and his work with Bruce Dickinson that shows Smith’s pace released to it’s full potential on many an occasion — Adrian seems more pumped up speed wise when he’s playing his own contributed material, whether that be in Maiden, or elsewhere. Though the solo classic’s H has contributed over the years are just phenomenal. Powerslave, The Trooper (where he as good as betters Dave Murray’s efforts) the melodic breaks and silky tones of the solo’s in Wasted Years and Stranger In A Strange Land, 22 Acacia Avenue, Phantom Of The Opera.(Live After Death) and on goes the list. Even more amazingly, next to all the solos he contributes to on Brave New World are arguable classics. The man has an excellent feel for mid paced arpeggios (where the hand, say three or four fingers, hit the notes successively), good examples being the solos on Killers, The Prisoner and Still Life.

Though Adrian starts to get in the big league of guitarists when he releases two of his finest electric guitar abilities — double picking (when both hands simultaneously strike the fretboard) and his brilliant control of the guitar tremolo.

The tapping is exemplified by his solos on Maiden numbers such as those in Children Of The Damned, Hallowed Be Thy Name, and Alexander The Great — all textbook Smith moments. Whammy bar use features on solos such as Seventh Son Of A Seventh Son and Aces High, amongst others, and is exhibition stuff — Smith is a great controller of the lever.

Squeals or pinched harmonics (extreme string bending) commonly feature in Adrian’s sound, throughout many of his solos and rhythms throughout the years. He’s also commonly uses a technique where, while bending a note severely, he pulls down the guitar lever to create another harmonic effect. Zakk Wylde and Eddie Van Halen are big users of this technique.

Smithy’s a big fan of scaling riffs, solos on the likes of Die With Your Boots On, Caught Somewhere In Time, Moonchild and Only The Good Die Young showing his wares to superb effect.

During his time with Dave Murray in the 80’s, like other Maiden guitarist Janick Gers, Adrian is a great executor of guitar harmonies (E.g. Murders In The Rue Morgue, The Trooper, Infinite Dreams), and the number of harmonies released by Maiden over the years is an endless and brilliant list. For many, similar to how Thin Lizzy were the harmony specialists of the rock World, Maiden are the harmony masters of heavy metal, bar none.

Similarly, his riffs, melody lines and the like played a vital role in helping Maiden in the 80’s to become one of the greatest heavy metal bands on the Planet. Adrian also has a good range of other contemporary guitar sounds. Trilling solos, (where a single note is plucked repeatedly in conjunction with others) are used here and there, perfect examples being on Heaven Can Wait and The Number Of The Beast.

Smith is also a supporter of wah wah, his solo on The Fallen Angel being his only Maiden studio contribution of this technique, as he mostly only uses it live, and only started using it a few years ago. But Mr ‘H’ Smith can have his dark side, to. You see, the man is in to something called de-tuning, basically, where the guitar strings are dropped for a lower, deeper and heavier sound.

Adrian recently was quoted in a few magazines of dropping the tone down from an e note to a d note for some Maiden tracks. And from the thumping riffs and power chord presence on the likes of The Mercenary, The Fallen Angel, The Nomad, Out Of The Silent Planet, that helps explain the reasons why Maiden’s new album proves more heavier and more adventurous!

Finally, Adrian is a superb user of guitar slides, and he is a good judge of when to use them. Can I Play With Madness, The Evil That Men Do, Powerslave and 22 Acacia Avenue on Live After Death, Killers and Hallowed Be Thy Name on Maiden England — need we say any more?

Adrian has used all of the above techniques throughout his various solo projects and time with Bruce, but the most classic tale had to be when, on Bruce’s hugely granite Chemical Wedding, not only were guitar’s de-tuned, but some strings were re threaded with bass strings for extra oomph! Maybe most telling of all is Adrian’s ability, like Dave Murray, to re-create the studio songs and particularly the solos, near 100% accurate and virtually mistake free — night in, night out! That is something that often goes unnoticed amongst fans (flip, it’s took us until near the end of the feature!) But you can never under estimate such a quality as this in a guitarist.

Criticisms? Well, we’d like him to release the maximum pace he’s capable of on a more regular basis. And like Murray and Gers, he is prone to repeating himself on certain solos and with certain techniques, but then there’s not a guitarist on the Planet who can claim to have not to have being offended for the same charge. Finally, Adrian has contributed little to Maiden acoustically over the years. Maybe on his other projects, but we’d like to see him more often showing his acoustic talents (assuming there are some to be found!)

Concluding, Adrian Smith is a multi talented guitarist who is a songwriter’s dream. In terms of virtuoso pace, he often shies away from it. But the way in which he structures his solo’s, coupled with all the various manoeuvres he uses, more than compensates for this. Adrian Smith has defined some of the most classic solos in Maiden and Metal.

And, while having the pace, he proves that you don’t have to use the fastest solo on earth to impress, something that brings a lot of his contemporaries crumbling to their knees. Rather, he possesses a blend of guitar lively magic that’s hip and full of charisma, bellying his subtle on stage presence.

H rocks, and we love him — in the most metallic (and Maideniest) of ways.