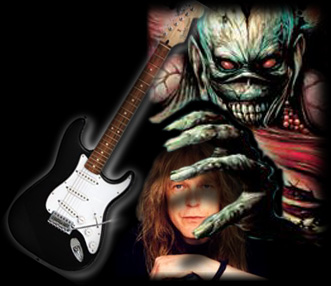 The guitarist who fired a new energy and rawness into the band during the 90’s, Janick Gers was the bands joint main guitarist of almost the entire last decade. Hardly a shy character in any guitarist’s book, Janick Gers joined the twin guitar attack of Maiden after previously being the single lead guitarist in his former bands, Gillian and White Spirit. Therefore, the omens of this fun loving Geordie’s ability to adapt into the Maiden set might have seemed negative. However, fortunately, Bruce Dickinson was a close friend of Janick’s, linking up with him on his first solo outing, Tattooed Millionaire (1990).

This paved the way for Gers into the set-up via a certain recommendation of one Nicko McBrain, and fortunately, Gers fitted into the Maiden set up very sweetly indeed. The only question remaining now, was how many pints did Jan buy ya Nicko! Guitar-wise at least, the move would prove a Maiden masterstroke. First and foremost, the band had replaced Adrian Smith, a proven songwriter who penned many of Maiden’s classic hits, with another great guitarist / songwriter. Early Gers co-contributions such as Bring Your Daughter… To The Slaughter (Maiden’s UK No. 1 Single), Be Quick Or Be Dead (A No. 2 Single) Wasting Love and (the good if not spectacular) Fear Is The Key showed much song-writing potential for the future.

Adding to this, Gers co-penned X Factor era favorites Man On The Edge, Lord Of The Flies, Look For The Truth, The Aftermath, The Edge Of Darkness, 2 AM and B-Side Judgement Day. Further contributions came in the form of the band penned the single Virus (1996), while Virtual XI saw only one Gers contribution, Como Estasis Amigos. Janick’s song-writing has arguably returned to it’s most classic form yet on Brave New World (2000), quality metal in the form of Ghost Of The Navigator, The Mercenary, Dream Of Mirrors and Out Of The Silent Planet show Gers penning his arguably best offerings to date.

There are the weaker moments in Gers’ song-writing portfolio such as The Apparition, Weekend Warrior and The Unbeliever, but for what Janick has written previously or future to this, we think this bears little relevance. Mind you, Maiden’s 1992 effort would have being a much better album without those tracks.

Sonically, Janick proved a lot more aggressive player than Adrian Smith when he joined Maiden, and this rawness (basically created by more distortion and hard hitting playing on Gers part) proved a welcome sound for 90’s Maiden, definitely giving a stronger edge to the bands sound. For example, if you compare a Gers era live version of Hallowed Be Thy Name, with a Smith era live version, you will hear a convincingly different tones on either. This is not implying one version is better than the other. But whereas Adrian Smith’s playing style complimented that of Dave Murray’s, Janick Gers tends to have a more forceful and all out sound of his own.

Obviously, with the albums on which Gers has featured, this sound makes the likes of Tailgunner, Be Quick Or Be Dead, Fear Of The Dark et all sound the business. But if the playing is too loose, the likes of From Here To Eternity and Bring Your Daughter. have being known to suffer on the live stage.

Similarly, this rawer sound can have a detrimental effort on Maiden classics such as The Clairvoyant and The Evil That Men Do. Though in many cases, prime examples being Transylvania, Sanctuary and Remember Tomorrow, this fret board bashing proves very beneficial, in some cases being superior sounding to previous live versions from Smith and Stratton era Maiden. The fact that Janick Gers is rocket paced guitarist with plenty of tricks and stage presence proved a winner with the fans and press alike when he replaced Adrian Smith in the band. Undoubtedly faster than his then predecessor, it’s fair to say that on evidence of some of the solos he’s served up for Maiden, he is generally the fastest guitarist in the band. Solos on the likes of Afraid To Shoot Strangers notably Live on Best Of The Beast), The Aftermath (Live on The Angel And The Gambler Single) and Bring Your Daughter To The Slaughter (Live At Donington) are arguably in the top five of the fastest Maiden solos ever.

Gers continues to hammer out his speedy movements on the likes of Ghost Of The Navigator and Brave New World to name a couple. But mostly, studio wise at least, when playing solos, Janick opts to stay in very fast mode rather than virtuoso paced mode, (the latter exemplified by the previously mentioned efforts).

The likes of Be Quick Or Be Dead and the Man On The Edge solos are classic examples of this ‘very fast’ mode that we’re talking about. Generally a very structured soloist in the studio who puts more focus on the quality of the delivery than taking advantage of his true coloured pace, the exciting thing is that if he wants to, whether in the studio or Live, Gers can turn it on. Certainly on the likes of Brave New World and Live At Donington, this shows — simply classic Janick. In terms of other techniques, Gers gets through more guitar slides (basically, sliding either up or down the fretboard with your hands) in a gig than your average smoker gets through fags in whole day — and they come in all different shapes, positions and sizes! Okay, sometimes you’re in awe, sometimes you think it’s OTT — but it’s great during gigs!

Well, not where this guys concerned — not by a twelve foot Eddie! Swinging guitars around necks, playing catch with them, playing them by rubbing them against Marshall Cabinets and clothing, magical hand signs and ridiculous note holding. phew! We think that just about covers it!

Other tricks Janick opts for include hammer on’s (sounding fretted notes without plucking the strings) while sliding simultaneously, and alternate tapping (using the reverse of the hand to play notes). Examples of these can be seen on Raising Hell’s Hallowed Be Thy Name and Live At Donington’s Fear Of The Dark.

Janick is a superb user of the guitars tremolo lever, and has given it some truly manic abuse over the years. Tailgunner, Holy Smoke, The Unbeliever (Studio versions only) and any Live version of Bring Your Daughter… To The Slaughter or From Here To Eternity show him at his most menacing or fantastically ridiculous.

Gers must also be credited for giving Maiden a more acoustic edge. His input on Wasting Love, Fear Is The Key, Afraid To Shoot Strangers, Weekend Warrior, The Aftermath, 2 AM, The Unbeliever, Dream Of Mirrors and Out Of The Silent Planet has given Maiden a fresher dimension in their sound. As well as the rampant Maiden songs Janick has contributed to (Be Quick Or Be Dead, Man On The Edge etc) Gers is a bit of a smoothie on the slower moments. Wasting Love and the opening five of Dream Of Mirrors show him at his best, while numbers such as 2 AM and Como Estasis Amigos certainly offer likeable shades of quality, even if they’re not Maiden classics.

Best of all, like his fellow Maiden axe slingers, he knows how to churn out those rhythmic solo beauties. Wasting Love. 2 A.M. The Clansman. Blood Brothers. They do the talking with delightful volumes. Yes, Janick does have his moments — many, many good ones, but it’s no lie to say he’s dropped a few clanger’s in his Maiden years. From 1993 onwards, Janick has seemed to be a little complacent at times — in other words, his solos have, on a good few occasions, being too loose and messy.

In the early days, Janick played very tight, but still very fast and flashy (and he still does in the studio). But, as ‘94’s Raising Hell video demonstrates in several places, he has a nasty habit of bodging up certain solos by usually trying to do too much (or too little as the case may be!). The vintage example of a Janick howler is the solo on A Real Dead One’s Where Eagles Dare — as quoted somewhere before by this same writer, ‘the nightmare on Gers street’.

Second to this, he sometimes can stray to much away from the original studio solo’s — in fact, on the evidence of recent gigs, this is common 75% of the time. And while there are some excellent improvisations, you’d still prefer to hear that original solo — and occasions, the improvisations are sloppy.

The real problem we have with these criticisms is that Janick doesn’t have to have traits like this — he is a guitarist with towering ability. Whether he loses his edge slightly due to complacency or getting to over adrenalized while putting on a show for the fans, we don’t know, but sometimes we wonder if the man can be arsed to change this.

The final criticism we have of Janick is the fact that we’ve never seen him do two-handed tapping (unlike partners Dave Murray and Adrian Smith). True, it’s a very overused technique, but with all his pace and various manoeuvres, it’s very disappointing not to see any of this in action

However, for all these faults, fortunately Janick has many things on his side, as earlier mentioned. He’s a cracking songwriter. He’s got virtuoso tricks and virtuoso pace when he wants to turn it on. He’s Maiden’s fastest guitarist, and, if he wants to be, equally as fast as almost anyone out there. And. he’s a sheer entertainer. For those reasons alone, you simply have to adore this guitar wizard. But don’t you just hate it when he starts p**sing around.

Originally a feature written by Andy Law and Neil Gibson