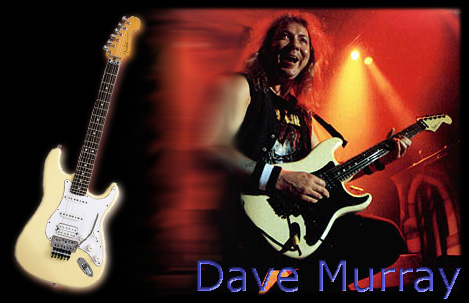 Dave Murray is the second longest serving member in the Maiden six pack, from 1980’s Iron Maiden through to 2000’s Brave New World. You’d have to use a welder to have any chance of getting that cast iron smile of his face, but then, his playing abilities show he has every right to be more than happy with himself.

A guitarist with a sound that simply defines the word smooth, this is a clear example of, how in his playing style, Davey’s influences come shining through. Murray solos offer a lot of melody, the concentration being less on playing as fast as he possibly can. This works a treat on solos to numerous to mention, though Fear Of The Dark and Brave New World’s solo’s are marvellously demonstrative.

Dave is a very gifted player who always looks very natural in his delivery of solos, and his knowledge of the fret-board is clearly vast. His special ability is how he links solo’s with the songs mood and atmospherics, combining fluid pace with plenty of rhythm — a real Murray speciality, that. Murray has a soulful, sometimes bluesy essence to his playing on the slower Maiden solos that almost sings. Check out his beautifully laid-back classics on Strange World, Phantom Of The Opera, 22 Acacia Avenue, Powerslave and The Thin Line Between Love and Hate. Simply, these demonstrate a player who’s as good as the very best in this department.

Other Murray characteristics include how he uses his little finger a lot more than most of his contemporaries, a technique that came with lots of practice courtesy of 12 bar boogie rhythms! Musically, Murray’s a hot stud for hammer on’s and pull offs, (see Maiden England for loads of demonstrations of the later) while his whammy bar (guitar lever) use is finely controlled yet metally fabulous! His solos on the likes of Two Minutes To Midnight, Run To The Hills and one of the five efforts on The Thin Line Between Love And Hate are prime Murray examples. Another fine dimension of Dave’s playing is his exceptional use of two handed tapping (when both hands simultaneously strike the fretboard). And although Van Halen popularised the technique, it’s possible Murray was inspired by Hendrix, as he was doing double tapping years before Van Halen! Vintage moments include the solos on Moonchild, Seventh Son Of A Seventh Son, Holy Smoke, Public Enema No1, and most notably of all, Sign Of The Cross. Another Murray highlight is his trill picking as we believe it’s known). Such instants can be heard on Moonchild, When Two Worlds Collide and The Mercenary.

In the way of scaling riffs, Murray doesn’t use them by the string load, but fine examples can be heard on the Heaven Can Wait and Blood Brothers solos. As for ‘squeals’ (extreme note bending known as pinched harmonics,) Dave wasn’t a big user of these in the 80’s. But the latter 90’s saw him using fair but not over the top dose of the things.

A big fan of wah wah, Murray’s solo in Still Life is his most momentous studio effort, and Murray’s two Judgement Day solos (Man On The Edge B-Side) are classically shredding examples. Though generally, he mostly adds the effect to his solos live (e.g. The Trooper, Hallowed Be Thy Name) rather than out and out when recording, and a lot more now than in his earlier years. Of course, to say Murray doesn’t let loose and fire out some rocketing finger-work is nonsense.

Check out his solos on The Number Of The Beast and Wrathchild Live on the ‘94’s Raising Hell (Video), his Remember Tomorrow effort on A Real Live Dead One for proof enough. If you want some examples of this breakneck pace with technical brilliance, then Live versions of solos of The Prisoner, Die With Your Boots on and Killers (all on 1989’s Maiden England video) are fine starting points.

Not a prolific user of the acoustic, but Davie shows he can really play via Killers number Prodigal Son, but, most beautifully and enchantingly of all, at the conclusion of Seventh Son Of A Seventh Son’s The Prophecy — if you like acoustic, you’ll love this. Best of all, Dave helped co-write this! Murray is also a fine example of a player who holds notes to wonderful effect, check out the closing bits of The Trooper, Man On The Edge and The Clansman solo’s for proof. Dave is an occasional user of alternative tapping (where you hit strings with the reverse of your hand) — gimmicky, but effective. Hell, the guy can even play with his teeth! Check out Raising Hell’s Wrathchild solo! 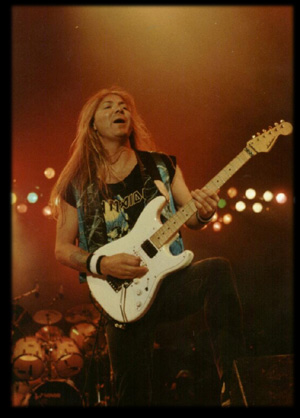 In the way of slides, Dave doesn’t do a full-length slide up the guitar, opting to just slide from the bottom end to about the middle of the guitar, a far cry from his younger days. Although Dave has still delivered some very special slides over the years. Murders In The Rue Morgue has a super, full scale slide, while the title track from the same album, Killers, has an outstanding slide intro (again, check out Maiden England to see it). Secular to this, Murray, like Janick Gers, sometimes opts for a reverse hand slide on the Killers intro, an impressive technique.

The riffs, harmonies and melody lines that Dave’s contributed to over the years have helped to make Maiden arguably the best Metal band in the World ever. Just check out their back catalogue, particularly anything from the 80’s, the classic tracks from the 90’s and 2000’s Brave New World for proof of that — that’s got to say something!

Sometimes Dave is a little too smooth and you don’t hear his solos very loudly on the good old stereo system, and this smoothness can deceive you into thinking he’s not playing as fast as he is. The other fault we have is that Dave doesn’t venture up the top end of the fret board enough with his solos — he plays most of his solos at the lower end of the frets. Yes, this is logical, but a mixture of top end rhythm would increase the vibes of certain solos. These aside, you can’t really knock someone who playability wise is as consistent and as talented in many areas as any other guitarist out there.

In terms of writing, even if he’s not the most consistent of writers, for what he has written, Dave has generally well-established credentials. Charlotte The Harlot, Still Life, Brave New World and The Nomad are his real classic contributions. Fates Warning, Deja vu, Public Enema No.1, Chains Of Misery, Virus, Justice Of The Peace, Lightning Strikes Twice, When Two World’s Collide, The Thin Line Between Love And Hate are other quality Murray efforts.

All in all, Dave Murray is undoubtedly one of the Worlds greatest guitarists — with him not being the most prolific song-penner, he’s not the best, but playability wise, he’s more than a match for the very best. And, dare we say it, overall, Maiden’s best all around guitarist.