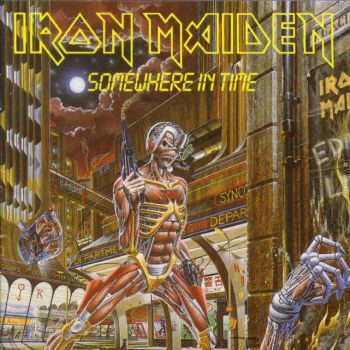 Released at probably the highest point of Maiden’s popularity, Somewhere In Time has a quite different feel than the previous albums. It represents a change of direction for the band, which was beginning to explore different sounds and styles. Perhaps the most immediately noticeable difference is the addition of guitar and bass synths. The synth sound is not overpowering, compared to Judas Priest’s ‘Turbo’ for instance, and in most cases it is more of a background filler.

Many fans have mixed feelings about the addition of the synths. The effect doesn’t seem to hurt the songs, but it doesn’t seem to make them better than they would have been without it. Faith No More comes to mind as a band that based its entire sound on the unique combination of synthesizer and metal guitar, with brilliant results. But Maiden had already carved a different niche, so why fix something that isn’t broken? Still, one has to respect an artist’s right to experiment and innovate.

Although it is not a concept album, Somewhere In Time has a bit of a futuristic theme, which begins with the album cover. It is by far the most complex and detailed of Maiden’s album covers, reminiscent of the sci-fi masterpiece Blade Runner, and contains almost 40 references to other Maiden songs and trivia.

This is my personal favourite Iron maiden album, the two singles are both great songs. another thing I love about this album is that it is so difinative from the previous albums, and the theme is much more exciting than previous albums.

Great album, superb harmonies vocals, guitar,bass, drums and great synthesizers too. Its awesome to see Adrian Smith write some of his own stuff and yes he is an awesome guitarist indeed as well as Dave people are highly leaving him out in this album.

Caught somewhere in time-Awesome Bass and Guitar synth opening, i luv how they sing the solo, sweet solos by Dave and Adrian as always.

Wasted Years-Awesome song Adrian did spectacular on this one, top notch solos, and i luv how bruce sings it, this song has so much meaning.

Sea of Madness-Kind of like the arc and the flood bible story, awesome tune. The opening with the raw bass and fast paced drums is awesome. I luv the mid part too when bruce stars humming its awesome, and not usual to hear him hum with his voice like that.

Heaven Can Wait-and yes it can, an instant metal, maiden classic. Always playing this one live, they worked thr arse's off on this one. Dynamite solos and the Lyrics are just extraordinary.

Loneliness of the long...-Great tune the beginning of the song rox, i luv how the chorus goes again and the ending of the song is cool too, when steve slaps the bass.

Stranger in a Strangeland-Adrain struck again, luv the opening with bass and drums, and yes the guitar and bass solo is outstanding to listen too.

Dejavu-the opening is awesome, dave's solos is spectacular, and once again the chorus is top notch, I luv how Bruce sings on this its so wicked sounding.

Alexander the Great-wow they had to dig up some major history towrite this one, this is such an amazing maiden album. The way the lyrics go, the bass and drums are dynamite especially in the middle of the song, and the clicking of both the guitar solos are astonishing, awesome closing.

This is no doubt another maiden classic, you think alot about the future and the universe when you hear this, the sounds are just amazing, well done maiden, get this album. P.S. nothing wrong with synthesizers there incredible and it fits so well with this great maiden metal sound, everyone should enjoy it. Up The Irons!!!

This album received a lot of mixed feelings, because Maiden here started to experiment with synthesized guitars. Some people hated it, many loved it, and some people - like me - didn't think it made awfully much difference. Nope, the synth-sound is not the first thing I think of, and it's neither the savior nor downfall of this album. As is ever so often the case, the songs are the weightiest factor, and I think Somewhere in time belongs in Maiden's row of classics with pride, regardless of whatever make-up and accessories. Speaking of synths, this is NOT another Turbo, just a little more rounded sound than before, but again, nothing you really think of unless you give it special attention (which is why they are not a nuisance). Songwise a very even-handed and balanced record, without the dizzling heights of Powerslave, but overall almost as good. Typical Maiden greats Caught somewhere in time and Wasted years mixed with less great but above average Sea of madness (madness/sadness - nice rhyming, you morons) and Heaven can wait (ok, so this is one I rarely play to the end). What really stands out on this album is Bruce, who is totally OUTSTANDING ON EVERY TRACK. His performance in my favourite song (and one of the most underrated) here - The loneliness of the long distance runner - is one of the best I've ever heard. Flying, just flying. This song also has one of my favourite Maiden lead breaks (the second). Deja-vu is another quite underrated speed metal blast. On the other hand, everybody's sweetheart Stranger in a strange land - which also was released as single, for reasons far beyond my comprehension skills - I find rather weak. Even less I care for closing Alexander the great, a supposed "overlooked classic" telling the tale of General Alex' hardships. I think it's too forced and humdrum, and not at all as nuanced as is usually the case when Maiden decides to go epic. Nah, it's probably just me and the ole aversion to 8+. You liked Powerslave, did you not? No reason to stop there then.

This for me is my favourite maiden album, the flow and power of this album is unmatched, every track here could appear on a best of, the solos, lyrics, arrys bass playing, everything fits perfect here. No doubt a masterpiece

I have to say it's Iron Maiden's worst album in my opinion (A) It had this faraway feel to it (B) It's too short.
Fav songs: Wasted Years, Deja Vú, Stranger In A Strange Land.
Worst Songs: TLOALDR, Caught Somwhere In Time

Holy crap this album is amazing. Every song is great, even Deja Vu. Caught Sopmewhere in Time is my third fav Maiden song of all time, the galloping riffs are so tiring to play, Dave and Adrian, and of course Steve have amazing stamina to play stuff like that for seven minutes! The lyrics are so cool and the solo section is ridiculous! Those solos are so good, some of the best I've ever heard Dave and Adrian play. Alexander the Great is a brilliant piece of history set to music. Great riffs, Bruce sounds real good on this one. Adrian's solo on this song is enough to make this album a 10! All the other songs are great, but The Loneliness of the long distance runner needs special mention, this song is so underrated, the lyrics are bang on for anyone who has ever ran in track and field (like me) and the guitar work is superb, and Bruce does some of his best vocals ever on this song for the chorus part, this song is so good! This album, Poweslave and the first album are all must have Maiden albums.

This album is a real masterpiece!! The guitarsynth is so well used, because you'd think that the might just turn up with som fuckin' popalbum, but they
managed to sound harder then ever!!! The best songs on this album is: wasted years, heaven can wait, siasl and tlotldr!!
The worst is Deja vu!

The best album they have done !! A masterpiece from the beginning to the end. All songs are powerfull and strong.

The groundbreaking experimental album blew me away when i first heard it. The synths, the loud melodic guitars and the best vocals yet make this album a must. Every track with the exception of Alexander the great are perfect and i only wish they play Deja Vu live. Even the B'Sides-That Girl and Reach Out are album worthy. this album is ecstacy to the ears. Adrain Smith's writing ability really took off here.

A change on maiden´s sound. The synths are allowed now on their music and they fix really well. It´s very heavy, but not as fast as Powerslave. It has definetly a more comercial sound, but of course, it´s not commercial at all. Very good songs, all written by Harris and Smith, and colaboration in one song by Murray. It has amazing songs like Wasted years, Stranger in a strange land or Caught somewhere in time. But the band would find the best result with it´s new sound on the next album, two years later.

Rock meets syth guitars. This is a great album with very strong melodies.

This is the first Maiden album I ever heard and to this day my favorite album - not just my favorite Maiden album, but my favorite rock album. I really like the way they used synth guitars on this album without losing the heavy metal sound. The songs themselves are very well composed, and almost all of them have an epic feel (this could be due to the reverby sound of the guitars). It also contains some great Smith compositions as well as the typical Harris epics. I don't haev a particular favorite on this album. They're all great.

Great album, maiden are not afraid of experimenting.

i love playing with friends especially when that friend is you