Visions of the Beast 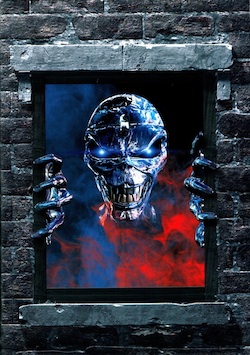 This double-DVD set represents the ultimate collection of all Iron Maiden video clips from 1980 to 2001. All the videos that were released little by little over the years are gathered in these DVDs and any Maiden fan definitely needs them.

As it is usually the case, some hidden features can be found on the discs. The way to discover them is actually pretty simple.

You don’t even have to watch the videos entirely, but simply press “next” to eventually go to the hidden bonus tracks. Likewise, playing 3 times ‘Hallowed Be Thy Name’ on the second disc will lead you to the 666 door and you will hear Nicko saying “No! 664! The bloke next door!” before being taken to the right place.

Very very very very good DVD collection. It even includes WOMEN IN UNIFORM!! It's actually pretty good. It includes lots of live coverage like ROCK IN RIO (their best live concert.) It has an incredible amount of extras like CAMP CHAOS (cartoon versions) of ACES HIGH, NUMBER OF THE BEAST, FLIGHT OF ICARUS and RUN TO THE HILLS. You even get to see Maiden playing footy to the music of FUTUREAL!! Steve kicks ass!! UP THE IRONS!!