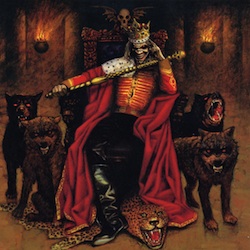 Edward The Great is Iron Maiden’s third compilation album, after Best Of The Beast (1996) and Ed Hunter (1999). It is a collection of their greatest hits, so all you will find on this CD are songs that were released as singles through the years. One thing any Maiden fan will immediately notice is the lack of Paul Di’Anno-era songs. Apparently, they did not score as high in the charts as the others.

All in all Edward The Great is definitely not a must-have for any Maiden fan, as it doesn’t contains any rare or new tracks. However, the band/management probably knew they might get complaints from the fans and offered the album’s artwork for free on the official website.

A bold follow up to the legendary Number Of The Beast, Peice of mind, in my opinion is an album I would show to someone who didnt know anything about Iron Maiden. As an album its songs are a bit like marmite, you either love them or you hate them. Songs like "sun and steel" and "quest for fire" are deemed by some to be not up to par. For me they sound a tad like Power metal songs i would expect from bands like Manowar, but never the less they are still good songs, and a few songs are still played on the recent set list.

Edward The Great features 17 great Maiden songs, including the Rock In Rio version of Fear Of The Dark, but it just chooses the singles. Bring Your Daughter To The Slaughter and Run To The Hills are incredibly weak songs, but were put on the album because they were released as singles. What I think Maiden should have done is put a poll on their website featuring every Maiden song, and fans chose, say, their three favorites. I would assume the results would greatly differ from the actual track list. However, the Rock In Rio version of Fear Of The Dark is incredible enough to get you to instantly go out and buy the Rock In Rio CD and/or DVD. So, overall, a 7/10 is just about what this album deserves.

P.S.- The Eddie art is the best ever done by someone besides Derek Riggs, though some X-Factor fans may argue that point.

Edward the Great. I just bought it of my friend for 5 bucks to help out my discogrophy. I would probably recomend it to someone who has a few maiden cds acually. It really helped me out on which album I wanted to buy next. I didnt think it had theyre best songs though. They just chose the ones that got good chart numbers. For example, It had 4 songs from Seventh Son but only one from Powerslave and it was'nt even Aces High. Like another person said I think that they sould have taken a poll online and all the fans could vote. Still good songs though. So I would'nt recomend it as a first cd but as a 2nd or 3rd.

My first album of Iron Maiden. It is quite good including lots of my fave's. Most people think this was a pointless effort compliation album, but it got me started into Iron Maiden.

Hey Ghengis Khan??? What the hell are you on about this is the EDWARD THE GREAT album... YOU!! reviewed PIECE OF MIND!