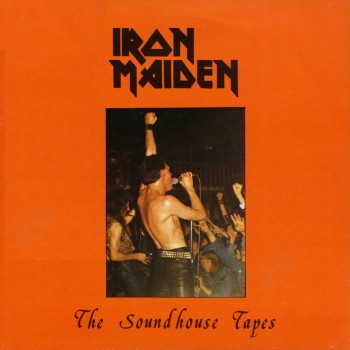 The Soundhouse Tapes are the very first recordings of Iron Maiden. This record features three of the original four songs from the Spaceward demo tape which was recorded in one 24-hour session on 31st December 1978. The fourth song of the set, ‘Strange World’, was not included on The Soundhouse Tapes because the band was a bit unhappy with its recording quality. Consequently, the Spaceward version of ‘Strange World’ was not released until years later for Best Of The Beast compilation. Because only 5,000 copies of The Soundhouse Tapes were made, they have become the “Holy Grail” for Iron Maiden collectors. The 7” vinyl E.P. was only available through direct mail order, and were quickly sold out. Although several record companies placed orders for 20,000 copies each, the band decided to refuse, feeling that cashing in at that time would have destroyed the magic of The Soundhouse Tapes.

The legendary demo, recorded on new year's eve 1978 and distributed through mail order by the band itself. This release proved to be a huge success for Maiden, and several record companies offered to press extensive quantities of it. The band decided to not sell out (!), just to retain the mystique of the demo - is that cool or what! As for the music, it's not that exciting, I'm afraid. Both Iron Maiden, Prowler and Strange world are very similar to the album versions, only with much crappier sound, and therefore quite redundant. Invasion is supposed to be an Invaders forerunner of some sort. Only through lyrics I can tell you, because musically it's an entirely different (and way worse) song. Note: Strange world was recorded at the same time as the other stuff, but never officially released, and not available on any single or album until Best of the beast came out in '96. Anyway, it's not quite accurate to call it a "bonus track", but I don't know what else to call it. Of course, a bootleg of this album isn't worth squat as collector's item (find it on napster, like I did), but the original 7", pressed in only 3000 copies, is one of the most sought after metal collectabilia in the world. Musically, it's thoroughly uninteresting (save for always kickass Prowler), with or without Strange world. So if you have the original, you have every reason to gloat, because I don't think it was ever meant for playing :).

Strange World on the soundhouse tapes is absolutely stunning. The guitar solos and passion in which this song is played (in a more blues style) is captivating and i only wish it was more like this on the album. the only downside is paul's slightly out of tune singing at some parts. Invasion is too slow, but its tricky playing that live or without quality studio work. Iron Maiden and Prowler are true originals. a must for any maiden fan.